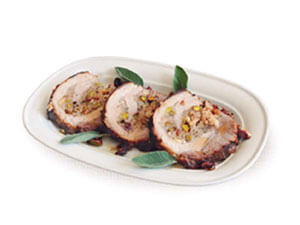 Soak the sultanas in a bowl of warm water. Brown the rice in a pan with half the butter and golden onion; sprinkle with a little wine and when evaporated, cook, mixing and adding stock from time to time. After 15 minutes, add the sultanas, the parsley, the chopped pistachio nuts and pine nuts. Stuff the pocket in the loin with the risotto preparation and sew the opening with kitchen thread. Heat the oil with the butter and seal the roast. When golden all over, sprinkle with the wine and cook in an oven at 180° for a couple of hours, turning often and basting with its own juices. When cooked, leave the meat to rest for a few minutes; then slice and serve with its sauce.